I first discovered the homemade films by Anger while living around the corner from the Westerfeld House in San Francisco, where he shot some of them (Invocation features Manson family member Bobby Beausoleil, Church of Satan founder Anton LaVey, and music by Mick Jagger). 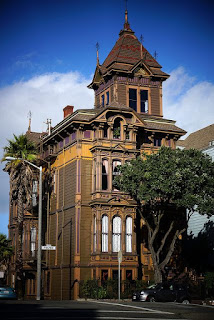 Aside from being arguably the most beautiful house in San Francisco, the house has a fascinating history. It's been occupied by Czarist Russians (known for awhile as the "Russian Embassy"), jazz musicians like John Handy, a theatre collective, and was eventually owned by Anger, who held Satanic rituals and kept pet tigers there — the tower used to have a pentagram on the floor, and there are claw marks from the cats on the walls to this day. The Grateful Dead and Charles Manson were frequent visitors.

Now the home is owned by a charming Victorian structure restorer who has lovingly rehabilitated it. It will be featured in a documentary, House of Legends, debuting this fall.

Read more about it at Curbed.