‘Reely and Truly’ - a short film on photography (Director's Cut)

‘Reely and Truly’ is a new documentary from director Tyrone Lebon, the director for Frank Ocean's latest video release "NIKES". This 30-minute film is a visual poem on contemporary photographers and their practices.

Lebon’s intention is for the film to be a photographic object in itself. It is shot on all available celluloid formats (including 65mm, 35mm, super 16mm, 16mm, and super 8mm). The film has a free structure with an unconventional narrative, taking on the form of a visual poem.

This film is part of the ongoing ‘Reely and Truly’ project which will culminate in a book of photographs, texts and films about the practice of over 30 contemporary photographers to be published by DoBeDo in 2015. This 30 minute film is an extended trailer for that project.

Proust's muse, the most fashionable woman in the world

"After making a careful study of contemporary fashion plates, Baudelaire came to the conclusion that one couldn’t examine clothes apart from the individual wearing them. “You might as well admire the tattered rags hung up as slack and lifeless as the skin of St. Bartholomeu,” he wrote in his essay “In Praise of Cosmetics.” In order to “recover the light and movement of life,” clothes needed to be animated by a living body, and it was only on this living body that they were to be understood. One wonders what he would’ve made of the nascent trend of the fashion exhibition, in which the fashions of yesteryear appear on mannequins, those motionless abstractions of the human figure.

“La Mode retrouvée,” now at the Musée de la Mode in Paris, and coming in September to New York, uses clothes as a sort of Pompeiian ash in order to sketch the person who once filled them out. In this case, it’s the Comtesse Élisabeth Greffulhe (1860–1952), who was by reputation the most fashionable woman of her time. At her salon on the Rue d’Astorg, an integral part of the political and artistic milieux, she arranged for what was thought to be the impossible Russian-Franco alliance, as well as the reception of Fauré, Wagner, Isadora Duncan, and the Ballets Russes in Paris. Historians of the era have argued that no patron did more for music than she. And this at a time when, no matter the fact that she was married into wealth and rank, she had neither rights nor property as her own, as was the case for all women under the civil code of the Third Republic." 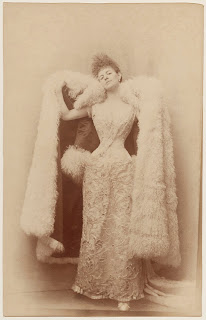 Read more at The Paris Review.
Posted by Unknown at 3:05 PM No comments:

Posted by Brandy Eve Allen at 9:30 AM No comments:

Is the Man Who Is Tall Happy? - Dir by Michel Gondry

An Animated Conversation with Noam Chomsky.
Posted by Brandy Eve Allen at 3:55 PM No comments: